Showing posts from July, 2016
Show all

7 year at the helm 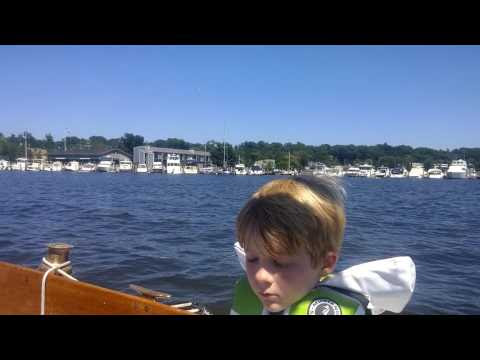 Kiddo manning the helm after a sail.
1 comment
Read more 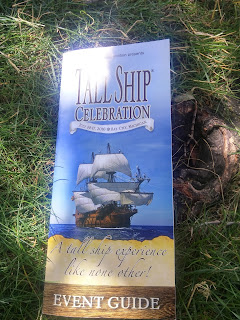 This year we visited Bay City Michigan for the Tall ship gathereing.  It was not truly intentional we just happened to be in the area camping and saw all the billboards along the highway.  So we figured, what an opportunity!   We started the morning by heading to the beach at Saginaw Bay State Park where we were camping.  From here you can see the ships under sail in the bay.  They were pretty far out in the distance and only one had its sails up. (See previous post regarding lake wind conditions).  After lunch at the camp site, we headed into Bay City for the grand show.   The ships were suppose to come in between 1-4pm The Denis Sullivan was the first to arrive just before 2:00.  We watched from the break wall as the crew masterfully brought the ship past us and along side the wall.  This is one crew that has communication down to a science.  Behind the Denis Sullivan came another blue hulled ship and docked on the other side of the river.  The event organizers
Post a Comment
Read more

The Forth of July All Ahead Zero Knots 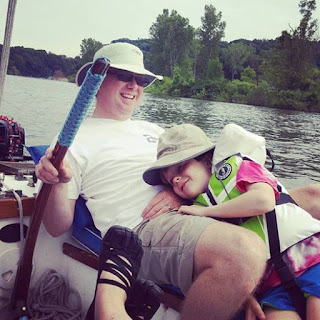 This summer is shaping up to be be a bit of a bust.  Day after day we have been plagued by a lack of wind.  Forth of July was no exception.  As a matter of fact it was one of the calmest days I've ever seen.  We headed out to Lake Michigan hopping to find a little breeze on the big lake.  Instead we found water so flat and calm if it weren't for the boat wakes we would have a huge mirror streatching all the way to Chicago.  After a few minutes with the main up we simple gave it up.  This is really the first time since owning the Typhoon we really couldn't make it move under sail.  Regardless, it was a good trip up the river and a nice work out for the motor.  Glad I cleaned the carborator as everything is running nicely now.
Post a Comment
Read more 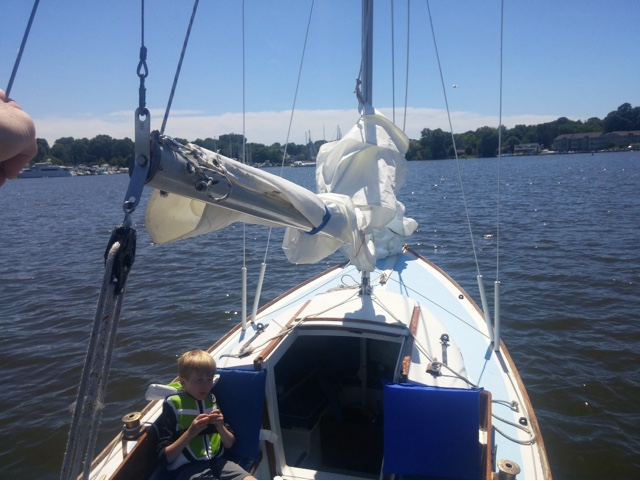 Out for a sail.  Lake Michigan was our first plan but it turns out the forecast had a small craft advisory with waves running at 5ft today. So we just stayed in Lake Kalamazoo.  We sailed back and forth in the lake dragging behind us a fishing line.  It was 2 in the afternoon high sun so we were not really expecting to catch anything especially as out bait skipped across the surface of the water but it kept the kiddo distracted.  After a while we anchored out for a snack. Then we rigged and pulled up the spinnaker.  When I went to pull it down the sock dousing line jammed so I had to release the halyard to get it down.  The spinnaker and its sheet lines ended up getting a bit wet. I brought it home to dry out and straighten out the lines in the bag.  It looks like I need to replace the bags lines as they are fraying and are likely the culprits for the jammed bag.  Boats, no matter the size, there is always the next project.  😀
Post a Comment
Read more
More posts

Popular posts from this blog 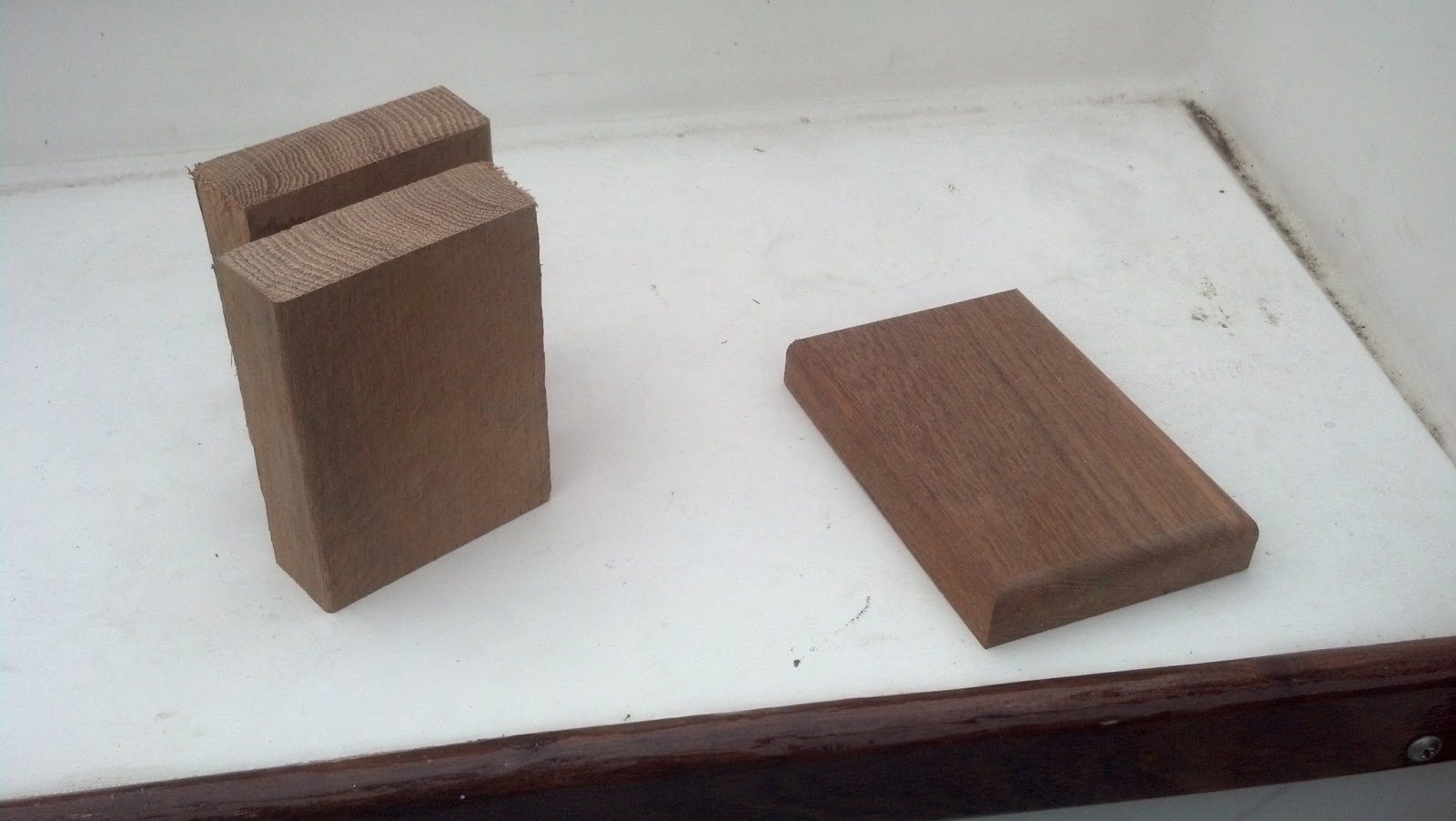 So this season I have been gearing up and changing my rigging around bit by bit as I find pieces here and there.  My ultimate goal is to  rig up a mast top spinnaker for use later in the season.  So far, I've got the mast head halyard set up.  Today I took the next step and installed a removable compression post.  My Typhoon has the saddle supports that came with older Cape Dorys but I thought it best to add a bit of extra support before trying out the mast head spinnaker. So here is what you will need:  A nice piece of teak, two other (less nice) hardwood boards for underneath the floor cut to 4 1/2 inches,  epoxy, 3M permanent mounting tape and a master lock adjustable door jam.. I routered the teak to give it a soft edge for when I bang my head into it.   Nice board ready to install. Setting the Teak upper. I drilled holes in the back of the teak plate to match the mast step through bolts.  I did not remove the mast step and put extended bolts on.  I wanted a smoot
Read more 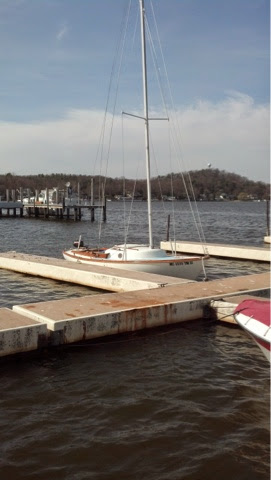 This post is a quick reference for rigging the main sail of a Cape Dory Typhoon.  Each boat over time has different modifications made to it based on the skippers preferences so your boat may not be exactly like this one.  However this is how I put mine together. I   first start with tuning the mast in.  I like to have a bit of rake in the mast and to be sure that it is in column.   Next I slide the booms goose neck into the mast. I slide the boom down to the sail stop and make sure it is tight with a screw driver. Then I clip the back side of the boom to the back stay catch. After that I get to work on untwisting the main sheet.   My current main sheet set up goes something like this.  It is a bit of a variation from the original set up.  You can see I still use one of the original Schafer stand up blocks to guide the sheet line to the cam cleat but the Harken fiddle block does most of the heavy lifting here.  Later this season I'm hopping to switch this system out for a traveler.
Read more 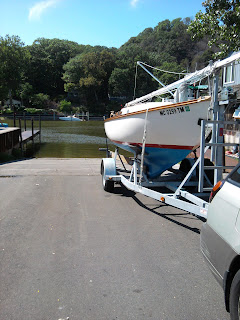 This was our first time launching the Typhoon off a trailer. BB and I had launched my old Catalina 22 off a trailer before but we figured this was a bit different the dory being a full keel boat.  I talked to a John at Tower Marine about the best places to launch in Saugatuck. He recommended launching at the  down town ramp next to The Star of Saugatuck .  The Star is a large paddle wheel river boat that cruises up and down Lake Kalamzoo and out to Lake Michigan.  When I went in to pay the ramp fee I asked the ladies at the counter about the ramp and water depth.  The drought this year was foremost on my mind and water levels are down here.  They said they didn't really know and in all their time working their had never seen a sailboat launch from the ramp.  So I paid the fee trusting John's knowledge of the area and we checked the ramp out more closely.  The launch went really well. So here are the basic stages we went through for those of you new to launching a sailboat at a
Read more

Some Other Great Reads